March 6, 2020 – ​Today, global DJ/Producer and entrepreneur, ​Steve Aoki​, shares his new collaboration “Halfway Dead”​ alongside the​ ​confirmed​ April 3rd release date for ​Neon Future IV ​ album​. The song features ​legendary drummer​ ​Travis Barker​ and rising singer/rapper​ Global Dan​, who broke through in 2017 via his viral single “Off-White” earning Virgil Abloh’s cosign, and will be with Aoki on his ​Neon Future IV: The Color of Noise Tour​ kicking off this month. “Halfway Dead” ​opens with an upbeat bass guitar as Global Dan explores the feelings of heartbreak and frustration, that turns to pure anger. Dan sings “Cause I can see you lying through your teeth/You’re one step closer to being my enemy/You’re halfway dead to me,” while the anthemic background vocals repeat “I told you don’t waste my time” as Barker enters on the drums. The track progresses narrating the familiar cycle of emotions felt during a relationship when you know it’s about to end, and can no longer stand the other person. The combination of Aoki’s bright electro-pop beat, with staple blink punk, and Dan’s piercing lyrics, create a catchy breakup antidote for listeners to bang their heads to while playing loud.

The new album serves as the latest installment from Aoki’s ‘Neon Future’ series and features previously released singles with ​Darren Criss, the Backstreet Boys, and Maluma ​to name a few, along with new tracks featuring artists such as ​Lay Zhang, Zooey Deschanel, will.i.am​, and more. ​Neon Future IV ​ sees Aoki in his latest musical state, “everytime I do an album it’s like a stamp, a time stamp of my musical evolution and progress and creativity coming out,” comments Aoki. 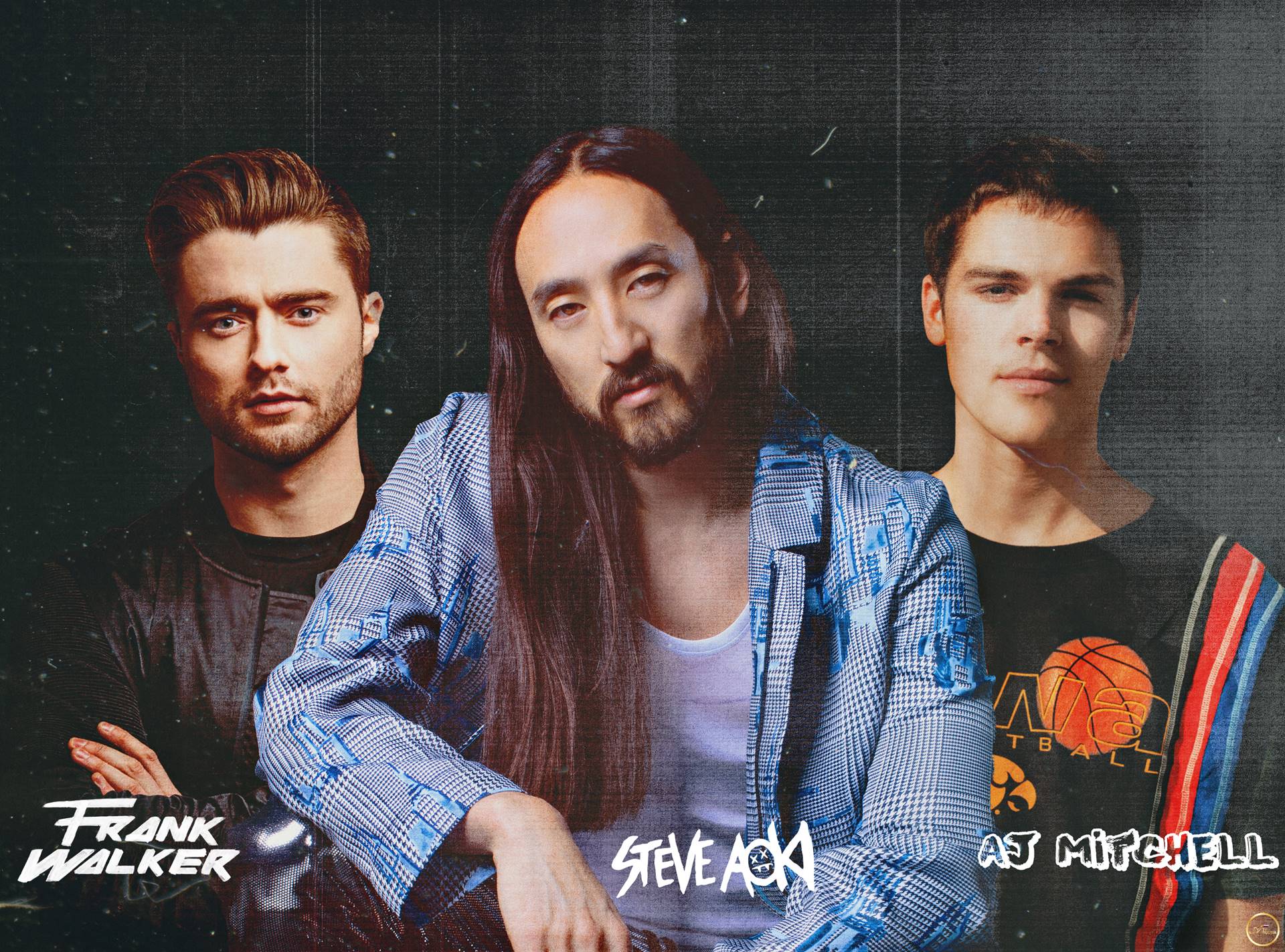 “This is the timestamp from the end of 2018 to 2020.” The tour, a reference to both his upcoming album as well as his critically acclaimed memoir, ​kicks off in Toronto on March 5 and continues through April 24th​ ending in San Francisco. Joining Aoki and Global Dan on all dates is ​Timmy Trumpet ​along with a selection of handpicked ​Dim Mak​ artists, plus extended friends and family, including ​Deorro, Riot Ten, Gammer, ARMNHMR, QUIX, Godlands​ and ​Max Styler​. The show will also feature a brand new production design created by ​Tobias Rylander​, best known for his work with acts such as The 1975, The XX, and Phoenix. The tour will also feature set design by ​Superplastic​, the world’s premier creator of animated celebrities, in conjunction with their partnership with Steve, just announced yesterday. The two brand new, limited edition Superplastic x Steve Aoki Janky Toys: “Neon Future” and “Playhouse,” will both be available for purchase exclusively at superplastic.co and on site during the tour through April 2020. 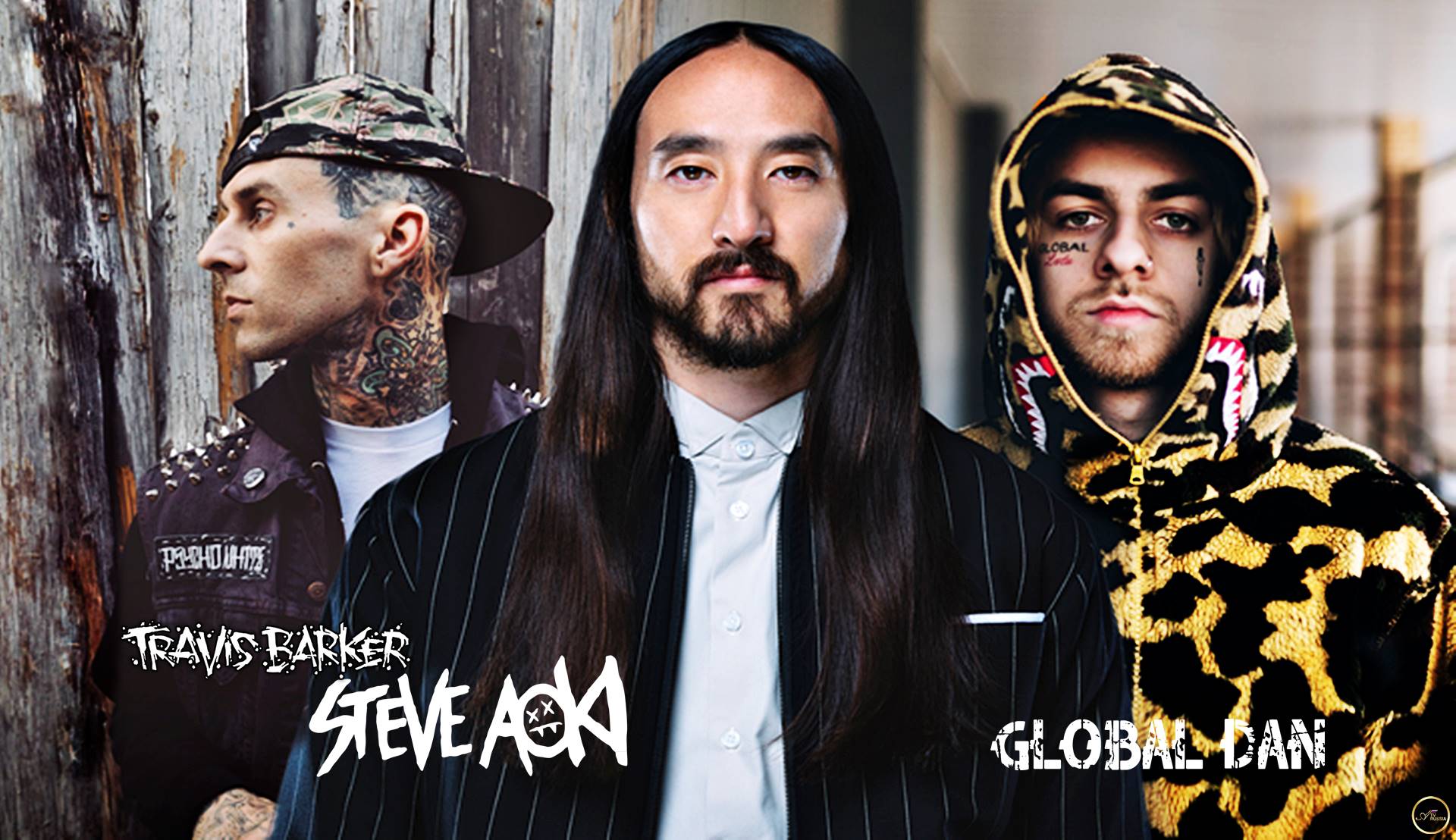 January 17, 2020 – Today, global DJ/Producer and entrepreneur, Steve Aoki, is sharing a brand new single off his forthcoming Neon Future IV album, “Maldad,” featuring Latin Urban pop sensation Maluma. Alongside the new single, Aoki is officially announcing his 24-city North American Neon Future IV: The Color Of Noise Tour, a reference to both his upcoming album as well as his critically acclaimed memoir that was released via St. Martin’s Press last year. Combining Middle Eastern and Latin-urban influences, “Maldad” is a seductive and inviting track that will lure fans to the dance floor and fall in line with the beat. Maluma narrates the story of the good girl who feels like cutting loose: “dicen que es juiciosa pero está puesta para la maldad” -they say she’s level-headed but she’s down to be bad. The music video directed by Roxana Baldovin, accompanies the song with a fuse of tribal and contemporary choreography and leading scenes from both Steve and Maluma, who show off their individuality with charisma and chic signature style. “Maluma and I have been working on this for awhile now and I’m excited that we are finally able to bring our two worlds together with Maldad,” said Aoki. “Latin music continues to impact globally and I’m proud to be championing this movement on stage, radio, and for my fans everywhere.” “Being part of this track with Steve is creatively fulfilling as he is an EDM pioneer. I am a fan of his achievements and everything he’s done to pave the way for merging music and culture. I am so excited for everyone to see and hear this collaboration, and continuing to work towards global fusion,” comments Maluma. The tour kicks off on March 5th in Toronto and wraps April 24th in San Francisco at the legendary Bill Graham Civic Center. Joining Aoki and Timmy Trumpet on all dates is rising DMV rapper Global Dan, who broke through in 2017 via viral single “Off-White.” Additionally, a selection of handpicked Dim Mak artists including Deorro, Riot Ten, ARMNHMR, QUIX, Godlands and Max Styler will provide support, showcasing the dynamic sound of Aoki’s label. The show will also feature a brand new production design created by Tobias Rylander, best known for his work with acts such as The 1975, The XX, and Phoenix. 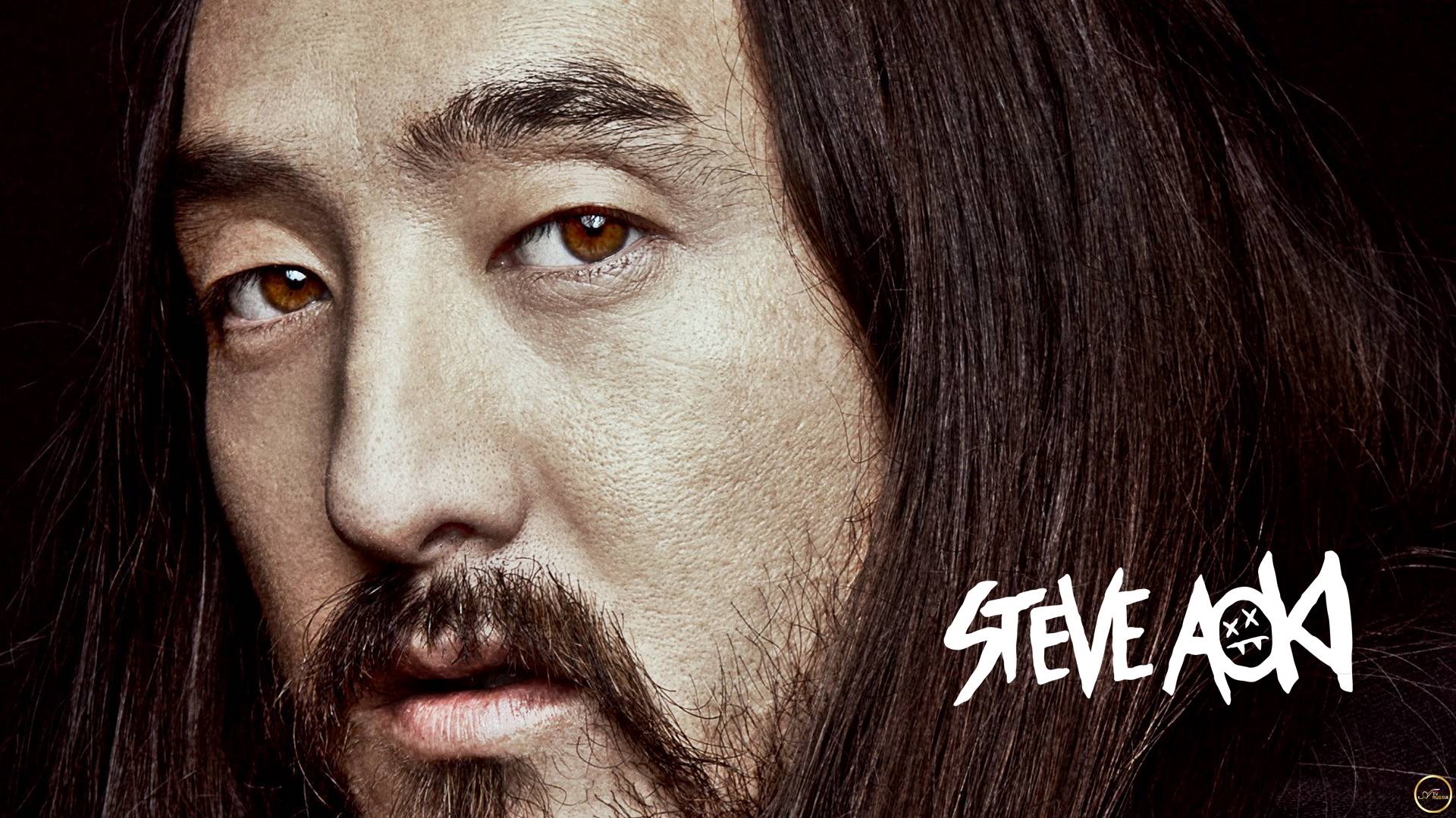 Steve Aoki – the two time Grammy nominated producer-DJ is one of today’s most successful American cross genre artists, collectively counting 1.5 billion music streams on Spotify, with an additional 2 billion music streams on YouTube. As the founder of the trendsetting record label, events-lifestyle company, and apparel line Dim Mak Records, which he founded in 1996, Aoki has helped launch the careers of global acts like The Chainsmokers, Bloc Party, The Bloody Beetroots, The Gossip, and The Kills, among many others. Dim Mak today counts more than 1,000 official releases from the biggest acts and most buzzing newcomers across EDM, indie rock, hip-hop, and beyond over its two-decades-plus discography. As a solo artist, Aoki boasts a lauded discography that includes: Wonderland -2012, his debut solo album, which garnered him his first-ever Grammy nomination for Best Dance/Electronica Album; the Neon Future series, 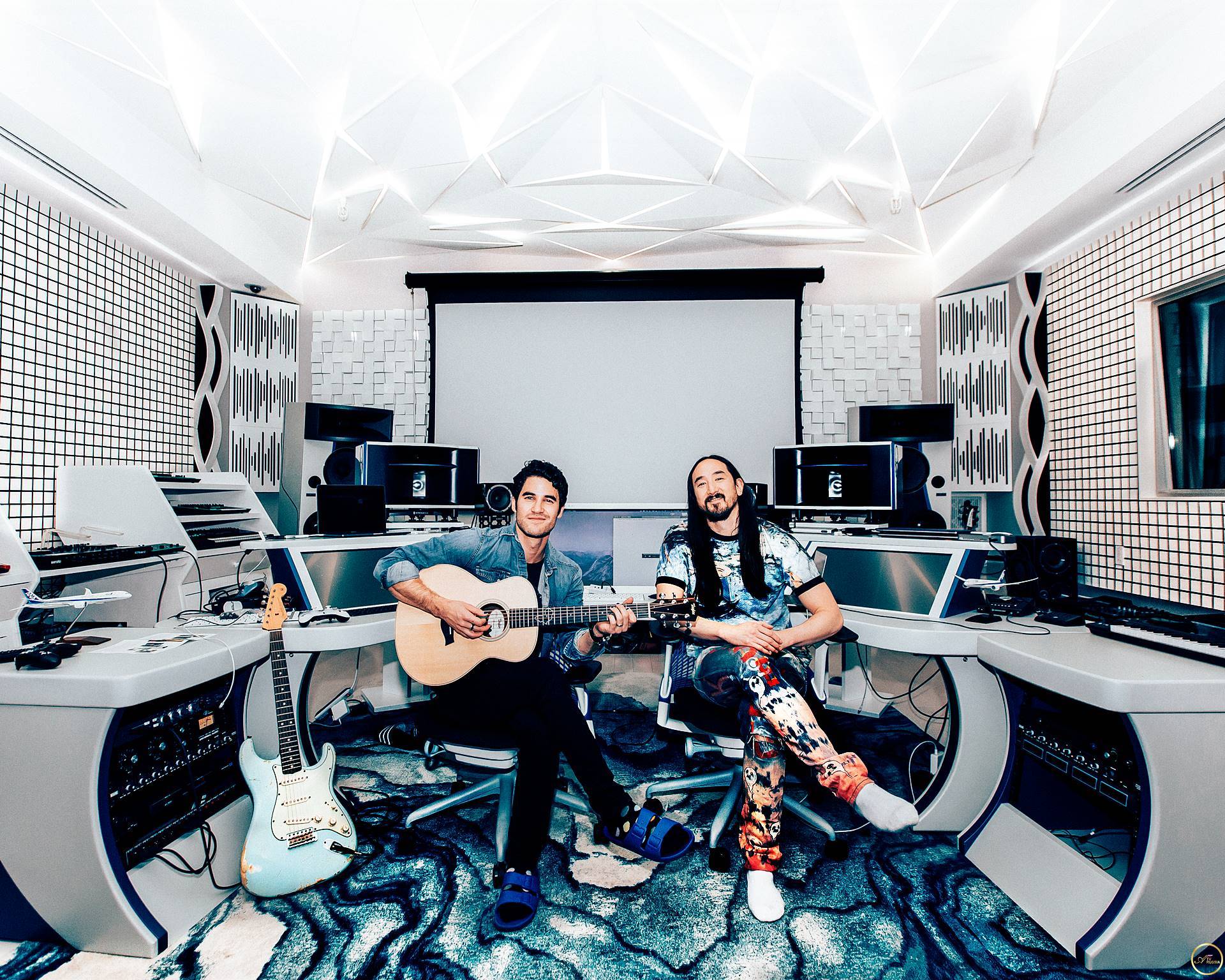 and the hip-hop centric Steve Aoki Presents Kolony -2017. Recognized by Forbes as one of the top 5 world’s highest paid DJs and the world’s hardest working DJ, Aoki is “one of the most in-demand entertainers in the world” -Billboard, counting more than 250 tour dates per year, with past performances at nearly every top festival around the world including Coachella, Ultra Music Festival, Lollapalooza, Fuji Rock Festival, Tomorrowland, Electric Daisy Carnival, and more. In 2012, Aoki founded THE AOKI FOUNDATION, which primarily supports organizations in the brain science and research areas.[/stextbox] 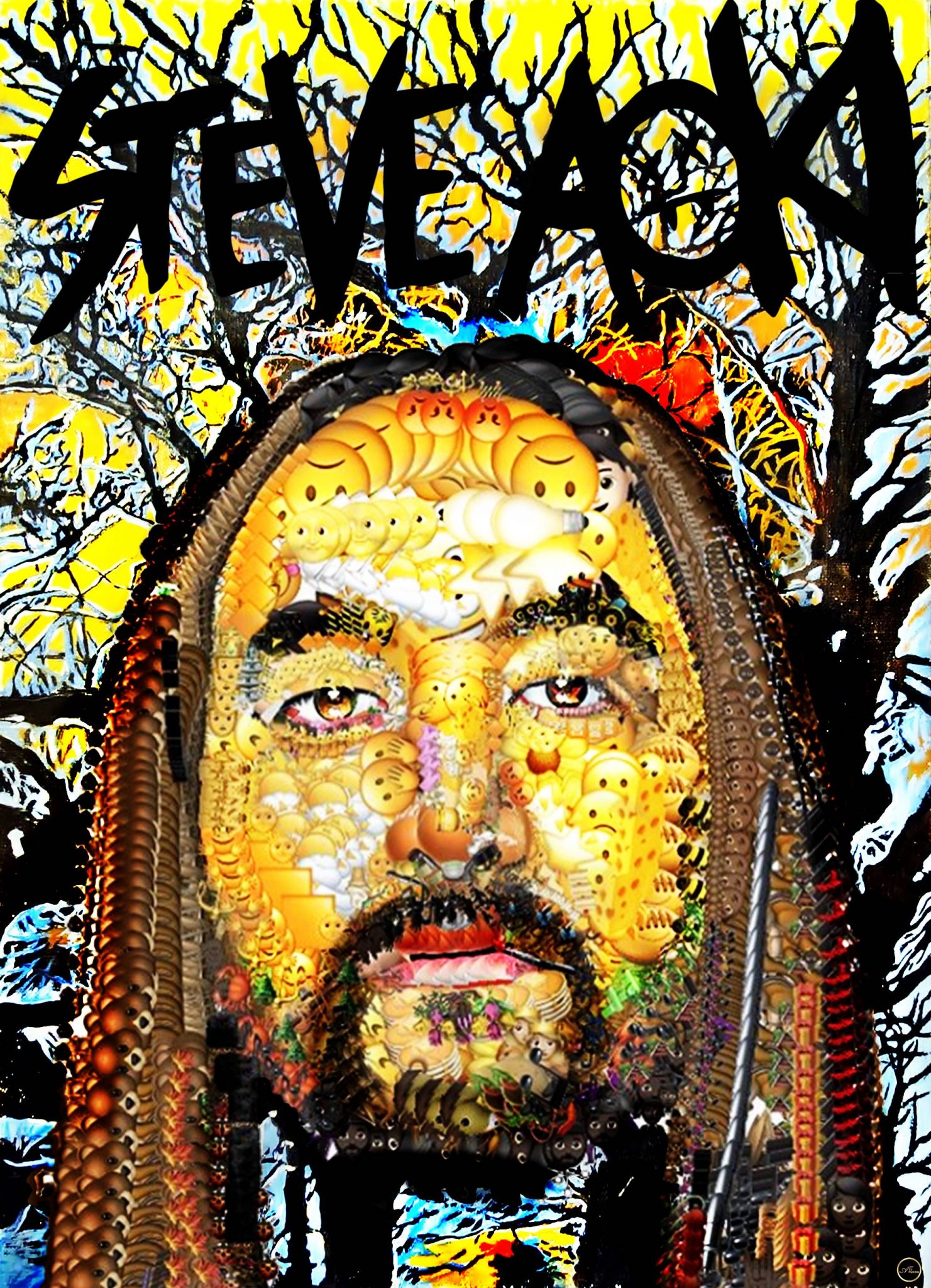 New York, NY – July 12, 2019 – Today, two-time Grammy nominated DJ and Producer Steve Aoki and Billboard charting singer/songwriter and Emmy Award winner Darren Criss -“American Crime Story: The Assassination of Gianni Versace” pair up to release their upbeat, energetic collab for “Crash Into Me”. This surprising duo, from two different walks of the industry, came together to put an authentic, creative dance spin on the song, originally released in 1996 by Dave Matthews Band, which won a Grammy Award for Best Rock Song -1998. Criss’ endearing vocals kick off the track, as the widely popular lyrics of longing and infatuation flow out. The momentum builds as Aoki’s signature electro-pop sound infiltrates and increasingly heightens, further propelling you into the song while the familiar lyrics flood the room. This loaded dance-pop version reinvigorates the 1996 original into a summer hit, with a seamless blend of Aoki at the switchboard and Criss at the mic. “Darren and I wanted to do something different and surprising out of the gate with our collaboration,” said Aoki. “We bonded over classics and this surely was one of them. We hope you like our version of the iconic DMB Crash.” “Steve Aoki and I both share a love for reinvigorating familiar songs by fusing them with seemingly unconnected musical styles. And for as long as I’d had this wild idea of transforming Dave Matthews seminal ballad ‘Crash Into Me’ into a dance track, I always thought Steve would be the perfect person to bring it to life,” said Criss. “So when we finally got the opportunity to meet, I was beyond psyched that Steve was as into the concept as I was, and we began working on it almost immediately. The total unexpectedness of it, the unapologetic fun of it, and of course the deep love of Dave Matthews we both had made creating this version together an absolute blast.” 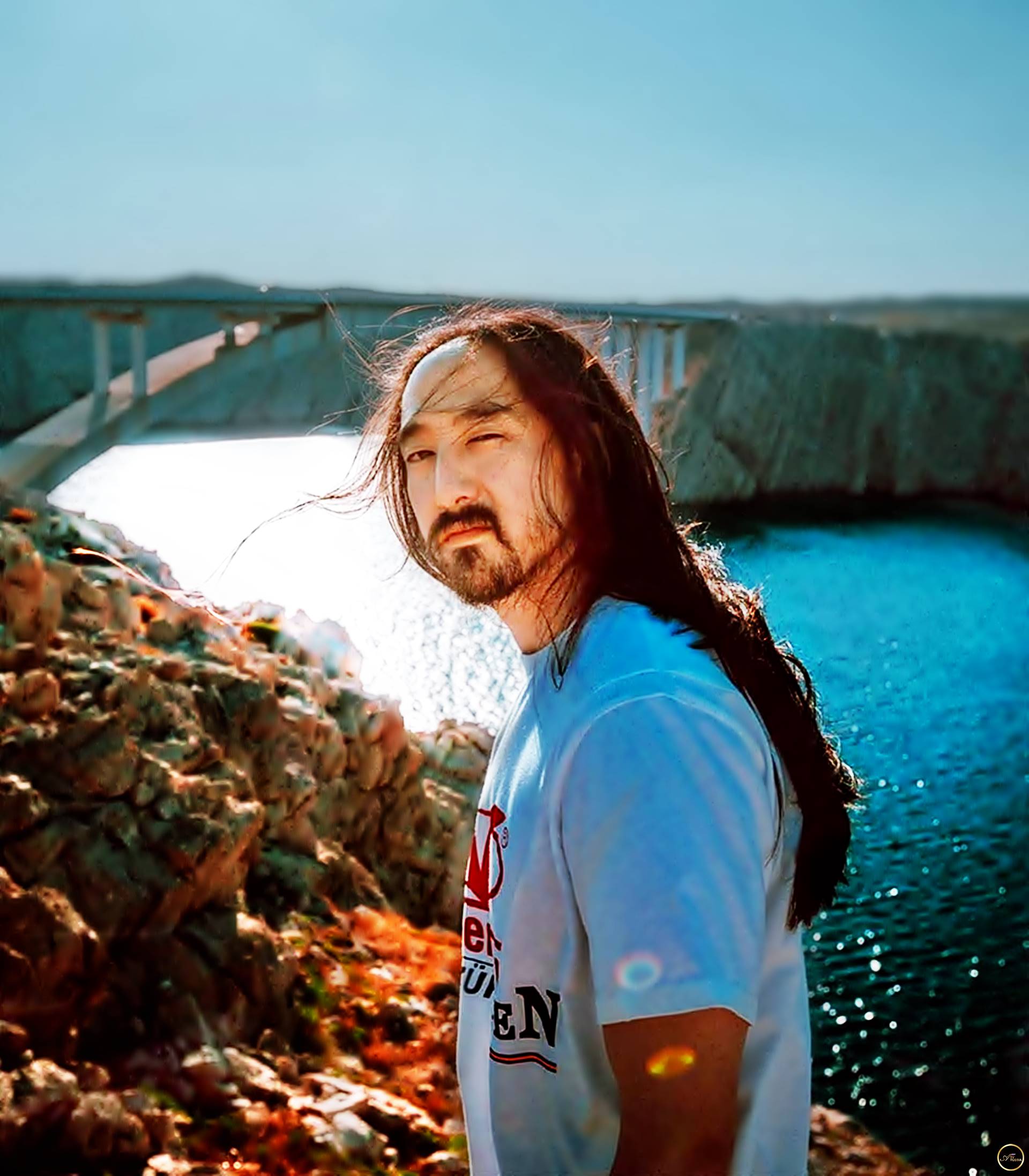 December 6th, 2019 -​ two-time Grammy-nominated DJ/Producer Steve Aoki, 17-time Grammy Award winning musician Sting, and platinum-selling trio Shaed​ -known for their hit single “Trampoline”, team up to release their new collaborative anthem for soulmates everywhere an offering from Aoki’s upcoming ​Neon Future IV​ “2 in a Million”. The track begins with Sting as his soothing, unmistakable vocals captivate over Aoki’s slow but steady build, a signature of his pop ballads. The beat then drops introducing the pure vocals of Shaed’s lead Chelsea Lee as she joins pre-chorus with Sting to harmonize “how many people in the world are looking for a love like this tonight/ How many people in LA out there are searching for a sign/ How many people in the crowd and I still wander by your side,​” ​ grappling with the search of finding one’s soulmate through all of life’s complexity. The music video mirrors the sentiment of the song and its natural progression of the quest for a soulmate, opening with Sting on an empty stage in the spotlight alone. Thereafter two contemporary dancers join him on stage in a portrayal relaying how the two are ‘meant to be’. Next, we find Shaed in the mezzanine of the same theatre, while the video continues to intertwine all three acts – Steve, Shaed, and Sting in separate places within the theatre, up until we find them together on the rooftop overlooking the cityscape. 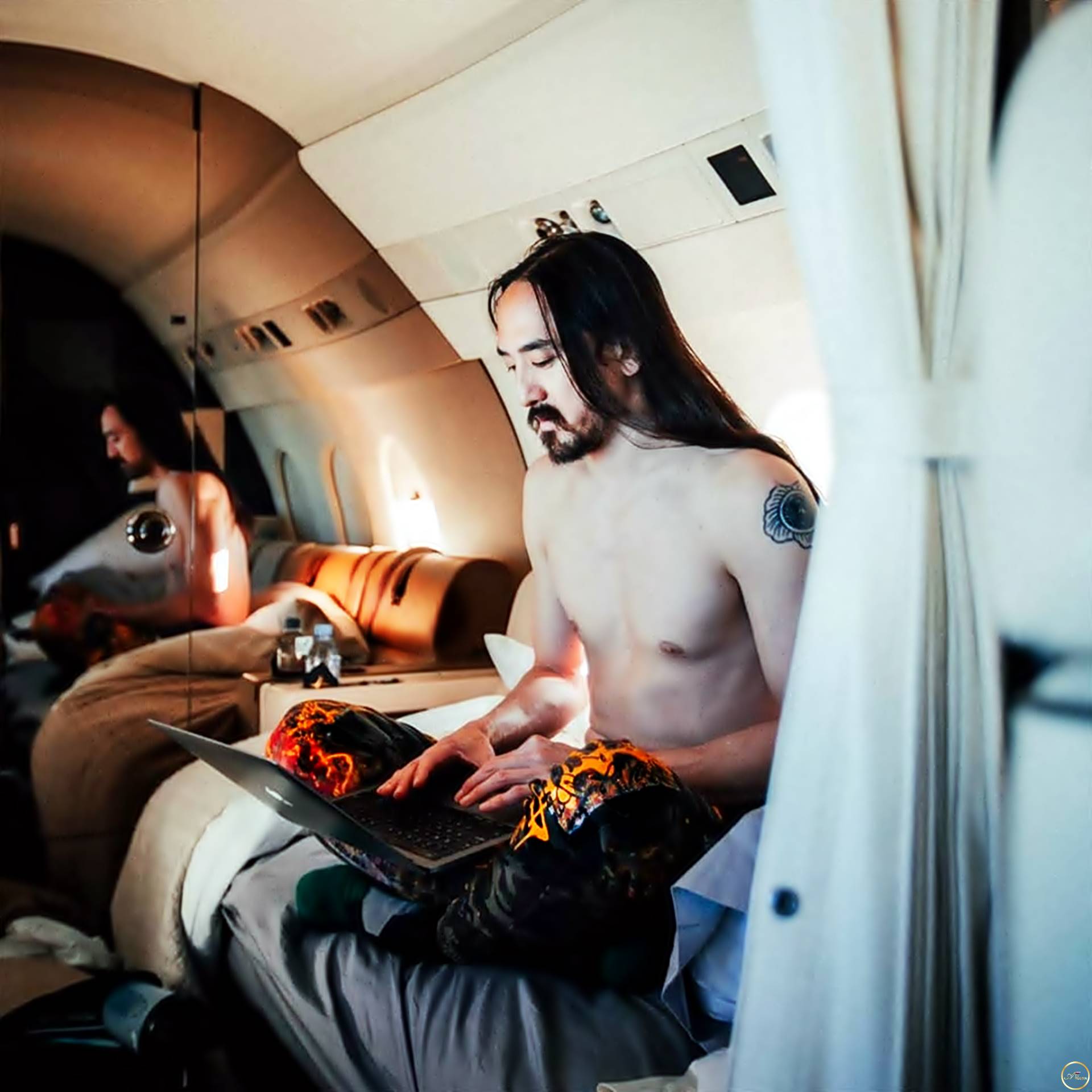 “I am beyond excited about this collaboration with Sting and Shaed,” said Aoki. “Shaed is a group of incredible talent and Sting is just a legend. I’ve been a fan of his for as long as I can remember, so it’s surreal to have him on one of my songs. What they both brought to the table made for an incredible track, so ready for the world to hear it.” Sting added​, “To me, the greatest element in music is surprise so I’m always open to collaborate with other artists as you never quite know where it’s going to take you. This sounded like an interesting opportunity and I’m excited for people to hear the new track.” “We all grew up listening to Sting and The Police,” tacked on Shaed. “He was a huge influence on all of us so when Steve approached us with the collab it was a no brainer. We had the best time working with Steve and Sting and really love this track.” 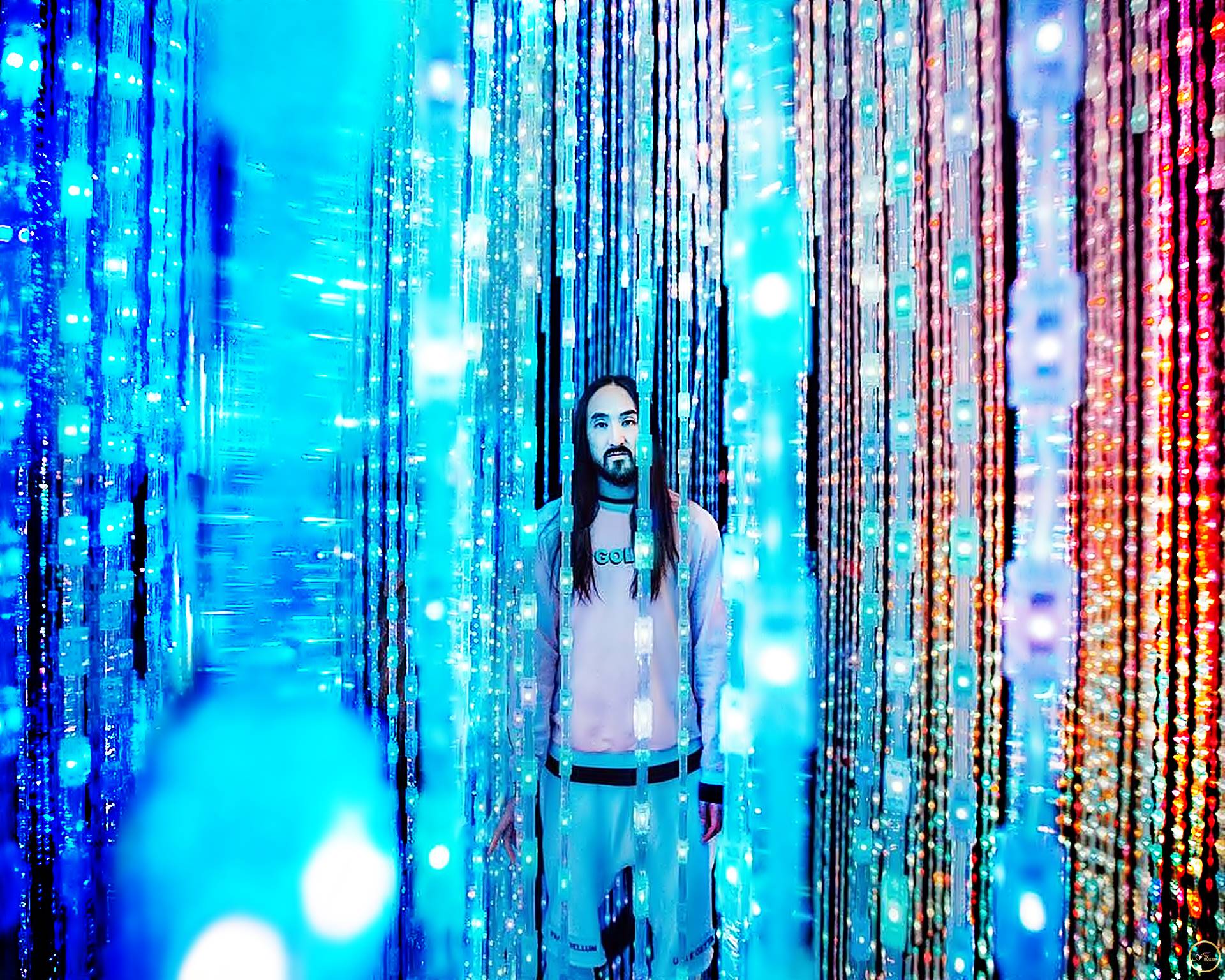 The best reviews about: “ Steve Aoki”